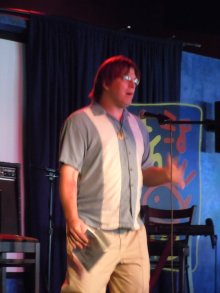 Bio: Matthew Sradeja lives on the south side with his wife Kelly and two cats. He has worked in the glass and automotive industries in various positions and currently works at MFC in Maumee. Matt began reading at open mic readings and features in 1999. He believes that there is energy in poetry seldom glimpsed yet to be harnessed and often times trapped in books waiting to be unleashed. Matt has poems on-line at Red Fez, rusty truck, Full of Crow, CFDL, Foliate Oak Literary Magazine, and Datura issue 80, as well as other places. He has poems in Broadway Bards “First”, Toledo Poetry Project, Toledo Free Press, everyreasonzine, and CFDL